Listen to "Classic Radio Theater with Wyatt Cox" on Spreaker.

Can't hear our podcast in the link above?
Then Click This Link to find our Direct Spreaker Feed! 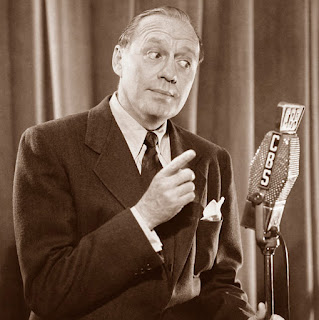 He first appeared in an episode entitled Murder in G-Flat on April 5, 1951. As summarized by the web pate Ghoulish Delights:

Benny plays a keen-eared piano tuner who finds himself inadvertently in possession of $25,000. But this money comes with Is the murder and mystery attached!

Benny would next appear on Suspense on June 2, 1952 in A Good and Faithful Servant. The Old Time Radio Review summarized this episode as:

An accountant in a department store, who is nearing retirement, carries out an ingenious plan to steal $50,000 - yet all does not go as smoothly as he had hoped.

Jack Benny's third appearance was outta space...a science fiction episode entitled Plan X.  On the February 2, 1953 episode, Benny portrays Zeno, the Martian, who is sent to meet the first rocket from Earth to land on his planet, and to put "Plan X" into effect.

The final Benny appearance on Suspense was on January 18, 1954 in The Face is Familar.  Benny plays an innocent schnook used by a gang of bank robbers to help them with a caper. Benny is joined by Sheldon Leonard as one of the robbers.

High comedy the shows weren't, but they attracted a nice audience at a time when radio audiences were falling. Elliot Lewis as producer/director was able to still get Hollywood's finest to take a fling at stepping outside their regular box and take a flier on doing something different, like when Fibber McGee and Molly starred in the episode Backseat Driver on February 3, 1949.

And now you know...why Jack Benny was on Suspense!  It was Elliot Lewis.

Dan Duryea stars as The Man from Homicide

Hear our shows through Amazon and the Audible App.

The True story of Matt Cvetic?

Another great Christmas gift for the Drama Lovers!

The Truth about The War of the Worlds "Panic"